Meet Luke “LHITNEY” Whitney. Over the past few years, he’s been not-so-quietly blurring the lines between R&B, soul, and pop, fusing genres as he sees fit. Since shocking streaming sound waves with jaw-dropping acoustic covers of hit songs by Camilla Cabello and Post Malone, he’s accumulated over 28 million streams on his Spotify alone, and has created a community of fans who support his superlative sound. We got to chat with him about the making of his debut album, SUNSETS.

Q. How did you link up with The MADE Series and Extreme Music, and what was the experience like recording the album?

A. My business partner Steve-O is very connected musically in Houston. He’s the one who introduced me to my beast of a producer Darren “Lab Ox” Billy Jr. and Ruben Rivera from MADE. After Ruben heard some big potential in my music, Steve O said me and Darren gotta put 8 songs together ASAP. We went to work immediately. Long nights. I’ll never forget it. It was surreal recording the whole thing in my home studio. Every song was made in the house I’m standing in front of on the SUNSETS cover art.

Q. What were some of the inspirations behind your new album SUNSETS? What about it are you proud of most?

A. The organic creativity and chemistry my producer Lab Ox and I have when we make music is inspiring on it’s own. Whatever we were feeling and whatever the music told us to do we did it. I’m incredibly proud of the track “Sunsets” because it’s the only song I ever made without a guitar. Darren left the room for a few minutes, so I started playing around on the computer and found a sample I really loved. Eventually Darren ended up re-recording that sample to make it our own, followed by doing what we do best.

Q. How would you describe your style of music? How does it reflect yourself as a person and artist?

A. My music is a blend of all my influences old and new. Alternative/R&B/Pop if I have to put it in a box. I make songs with the intention of performing them live so I want them to feel as classic as possible.

Q. Who do you think you sound like? Who are some of the artists you are inspired by now?

A. Vocally I sound like a mix of Chris Stapleton, Justin Timberlake, and Ray Charles. Musically, I’m not completely sure. I guess that’s for you to figure out. I get most of my inspiration from older stuff but NOW, Anderson Paak’s band The Free Nationals vibe is inspiring. SiR, Allen Stone, K.R.I.T, my brother Tobe Nwigwe.

Q. You feel very transparent, powerful and soulful in your music. Where do you think that came from?

A. It is what it is man. It’s all perception. If I speak from my soul and that’s the depiction of my character you leave with, I’m happy with that. You have to write what you believe in and always unapologetically be your true self. Write from your heart. If you don’t, what are you writing for? Try your best to be the light, and keep it LHiT! Sure, time’s won’t always be sunshine and rainbows, but happiness is a whole choice out here.

LISTEN TO SUNSETS BY LHITNEY ON EXTREME MUSIC

Q. Your Spotify covers of Havana by Camila Cabello and Rockstar by Post Malone really put you on the map! How did it feel watching those blow up?

A. I didn’t know how to handle it! Millions of people from all over the world know my name and voice. I felt like I had to capitalize on the momentum. I sat down with my producer and business partner and made a plan to start releasing more music under the name LHiTNEY instead of my name Luke Whitney. The success of those songs ultimately drove me to keep [the name] LHiTNEY.

Q. Do you play any instruments? What do you play?

A. Drums were my first love. I wanted drums when I was younger, but my mom wouldn’t buy them for me because they were too loud! So, around 10 I picked up my mom’s guitar and started fiddlin’ with it. I was always getting into trouble so, my mom would ground me and take everything away except her guitar… needless to say I had a lot of time to practice. Bass was easy for me to pick up after that, and I’m learning keys as well.

Q. What’s your favorite part about performing? Of all your performances, do you remember a moment that sticks out?

A. My favorite part about performing is definitely connecting with the crowd. I did two tours all over America last year with Tobe Nwigwe, and I think we did a combined 51 cities in 75 days or something like that. My favorite moment was performing at the Bowery Ballroom in New York City. It was on my mom’s bucket list to go to NYC and she saw me perform to a sold out crowd. 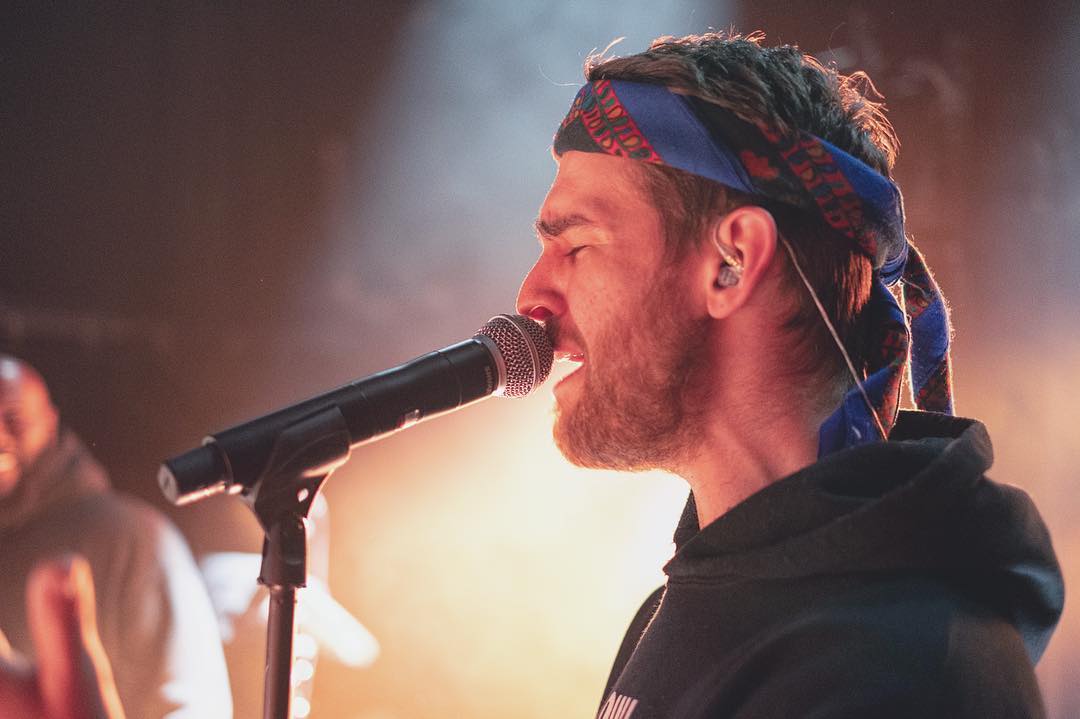 Q. What was some of the music you listened to growing up?

A. Well, I’ll give you a lil’ timeline. I’m from Chickasha, Oklahoma and my mom was a country singer so the beginning of my life was 90’s country. But, I’ve loved all different types of melodies since the jump. Hell, I was jammin’ DMX when I was 6 years old. Anyways, as the years went by I got into metal/punk rock and rap, then I got into softer Dashboard/Copeland vibes. Then high school came and I fell in love with Ray Charles and the old soulful sound which led me into 90’s R&B, while still freestyling in the bleachers and creating Hip Hop songs on Garageband and rappin’ to em with the homies.

Q. Did you have any musical influences when you were young?

A. Of course. My family. But my mama is my biggest influence because I grew up watching her be such a bad-ass singer. Johnny Cash loved my mama. Just one (exceptionally) notable name among many. She still sings with my Aunt Debbie in the same band she’s been in for 15 years in Beaumont, Texas. My whole family is musical in one way or the other though. Mom and Dad, both my big sisters, both my mom’s sisters, both sets of grandparents. I was born into it, it’s in my blood.

Q. When did you know you wanted to pursue music professionally? Can you remember a moment where something clicked?

A. There was definitely a moment when I knew something had to happen. I was a server at Pappadeaux Seafood kitchen in Beaumont for about 4 years, give or take. In 2014, I got fired and it pushed me to move to Nashville. My mom didn’t want me to pursue it without a backup plan, but I always knew music was the only career I want to pursue in life. That became the real plan. My mom wanted me to make safe choices and I wanted her to be happy, but I had to take the chance. Test your gut, trust your gut.

Q. What’s your approach when you’re writing songs? What do you draw inspiration from?

A. Melodies just come naturally to me, so the music is the easy part. The words/piecing together the message is the difficult part. I try to see the finished song in my head like a movie scene. When I was making the song “Hit Back”, I saw a boxer icing his knuckles, sweatin’, hurtin’. Or a young kid standing outside school, tryna muster up the courage to walk in because he knows he’s gonna get his ass beat. Ya know? Feel it though.

Q. What’s next for LHITNEY musically? Any fun projects in the works, or fun goals you can share with us?

A. I cook up every day just me and myself, but I have some songs with Houston’s very own ThePrblmSlvrs I am very excited to finish and release. I’m taking on their sound with it though. It’s dope and different from me and Lab Ox’s work. I can’t put myself in a box musically. Vocally it will all be the same, of course, but I’m definitely going to give the people a variety of different sounding music. At the end of the day, I keep it low key and take my time, but I’m always up to something!